In the brochure "Lilith", from which I will give an excerpt below, the main character Michael tries to change his succubus-psychogon to make it a mediator between him and his deity. The psychogon as a mediator should be directed and vivified by the conscious mind of the deity, although the substantial basis would still be originating from Michael. Michael mets the succubus-psychogon in his normally conscious OBE state and notices that it is inactive. That’s the situation where the story continues:

Instead, in front of Michael was a psychogon without own will and without initiative. It was like a car standing in a garage and waiting for being used. A passive figure, into which emotional power and imagination had to be transferred in order to make it become active. The comparison to a playing doll, which has to be wound up to be able to move around, suggests itself. And depending on how much the mainspring is tightened, the doll will move faster or slowlier. It is very similar: the more emotions flowing into the succubuspsychogon, the more alive and active it would be. Additionally, according to the quality of those emotions – fear, rejection or love – equally the psychogon would behave. Lilith was right. It all laid in his hands. It was up to him how the being would behave. 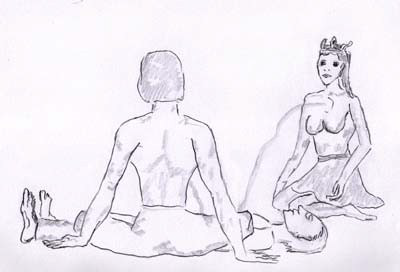 Below an excerpt from the unpublished text "Anima and Shakti":

To use a psychogon as mediator between us and a highly evolved being brings up many questions:

1) How do own characteristics interact with the psychogon’s quality?

2) Can a psychogon be misused by other, unwanted beings?

3) What mixed qualities could develop in a psychogon-chimera?

After due consideration I came to the following conclusion:

1) How do own characteristics interact with the psychogon’s quality? All characteristics and qualities a psychogon has are imprinted onto it. A psychogon is like a roboter that has to be programmed. It cannot evolve characteristics on its own. However, a (strong) psychogon possesses a certain survival instinct. Powerful religious psychogons of deities seem to evolve an own consciousness.

2) Can a psychogon be misused by other, unwanted beings? A (non-collective) psychogon can be compared to a pullover which is knitted for personal use. The psychogon possesses as much intelligence as a pullover, which means it has no intelligence at all. It contains an automatism which has been given to it by onseself. Like with a pullover, with a psychogon there is an ownership situation. It comes from me and thus it is controlled by me – or unconsciously by my subconscious. It is also possible for me to lend my "pullover", maybe to my sister or to another closely related person. In my case it could be the deity as well. If it is possible to lend a "pullover" (= psychogon) to deities so that their invisible form becomes visible, that will be the key point of the next question.

3) What mixed qualities could develop in a psychogon-chimera? If we wish the psychogon to be directed by a higher intelligence, we must not project any wishes onto the psychogon which would steer its behaviour. Only safety precautions are allowed in order to forbid low behaviours and vibes. Apart from that, we have to clear the psychogon for being steered by this certain intelligence.

Below an excerpt from a biography of Ramakrishna, who was a priest in the temple of Dakshineswar at the Ganges River. It is described how the energy (fluid) flows through the silver chord to a subtle body which is formed at that moment (psychogon):

Ramakrishna used to see a long white thread proceeding out of himself. At the end would be a mass of light. This mass would open, and within it he would see the Mother with a vina. Then She would begin to play; and as She played, he would see the music turning into birds and animals and worlds and arrange themselves. Then She would stop playing and they would all disappear. The light would grow less and less distinct till it was just a luminous mass, the siring would grow shorter and shorter, and the whole would be absorbed into himself again.