The terms etheric body and fluidal body, historically put forth and both an unfortunate choice, refer to a denser subtle, energetic appearance of a human being. The term etheric body was characterized by the theosophists, especially by Helena Petrova Blavatsky (1831 – 1891) and by Charles Webster Leadbeater (1847 – 1934). Paracelsus (Theophrastus Bombast von Hohenheim, 1493 – 1541) wrote about the "sideric body", which referred to a similar or even the same thing as the etheric body. The term "fluidal body" was coined by French occult scientists. Especially Hector Durville (1849 - 1923) and Albert De Rochas (1837 - 1914) have worked much on the etheric/ fluidal body, though both are mostly forgotten today.

The belief in an etheric body can be found as early as in ancient Egypt. There it was called "Ka", the "breath soul". In the ancient Egyptian illustrations, this "double" is often shown with one finger pointing at its mouth – this is a hint to "breath". Like in other cultures, the ether is considered to be linked with breath ("sigh out one’s soul", e. g. in German "die Seele aushauchen" means exactly "exhale the soul"). 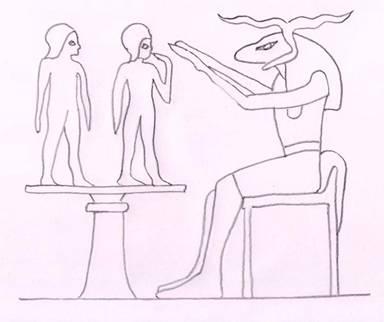 Chnum creates the physical body and the ka (etheric body)

Other synonyms for the etheric body: