Similar to a bath sponge that can become saturated with water, the human body is soaked with subtle substances. But "matter" or "substance" may not be the best term for it, because we speak of something that can be understood both as matter and as energy.

The subtle substances which are permeating our material body are adhering to its physical matter – through a force which may be similar to adhesion. The heavier (denser) the subtle matter is, the stronger it will adhere to the body. The strongest adherence is that of the fluidal/ etheric matter (see also: Substance Ether ). The astral matter – which is subtler than the fluidal – adheres stronger or less to the material body, depending on the auric vibe (= auric quality) which can be lower or higher. The sphere around the body called "aura" (= radiation) develops through a kind of emanation of the subtle substances which are permeating the material body.

A few words on what I mean with the terms "quality" and "radiation": every thought, emotion or wish has a certain quality to it. For instance, emotions and thoughts connected to hate or rage have a negative (= lower) quality, whereas love or compassion are positive (= higher) qualities. That means that the quality is always connected to the mental and emotional state. The quality of such a thought or emotion saturates the subtle matter. The subtle matter takes the quality which is given to it, whereat we then speak of an "auric quality" or "auric vibe". On the astral plane, this quality can be felt as a radiation – which means that the qualities of astral beings, objects or places can be sensed as their auric radiation. If one has well-developed subtle perception abilities, he may also be able to feel such an auric radiation on the physical plane in everyday life. It can also be felt "instinctively" in some cases. The colour of the aura is an indicator for its quality (see below).

"Ether" is the most common term for this densest subtle matter that is connected to the body and which can only be detached from the physical within a short range (mostly a few to several meters). It is also called fluidal substance or vital substance. The term "ether" used in occult sciences has nothing to do with the term "ether" in physics of the 19th century.

The etheric aura extends only about a hand’s width over the material body. The etheric substance can also be controlled wilfully, for instance to radiate it from the hands for healing purposes. A preferred exercise for learning to control the etheric energies is the exercise "compressing an iron rod" (see Practical Advise).

The astral aura extends about one meter over the physical body; when it has a very luminous quality it can also be up to several meters.

The astral aura is not only an energy field that surrounds the human, but it also tells a lot about him – about his health status, his actual emotional condition, his stage of development and much more.

Below a few examples for auras, seen by Guru Ananda. 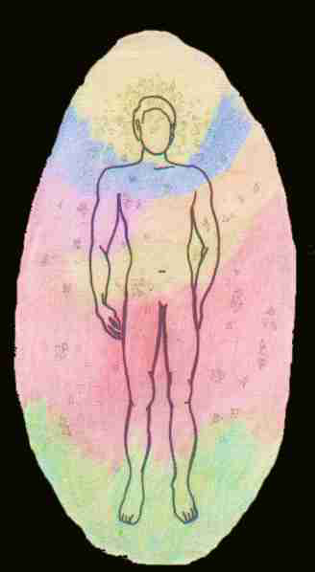 In the aura of an intellectual person, a dominant greyish colour was seen, similar to dull plaster. This grey tinge was interpreted as an overly intellectual mind without many emotions. 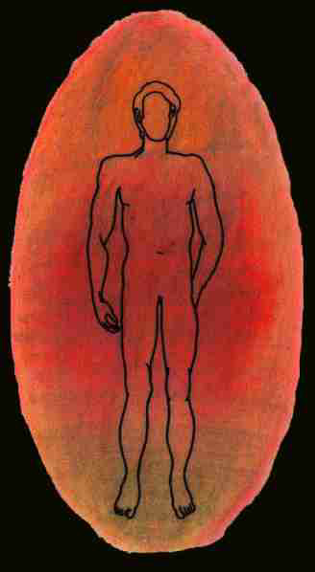 The aura of a human who only pursues carnal pleasures and material business. It shows a colour of dull red clay which spreads from the Muladhara over the whole body. 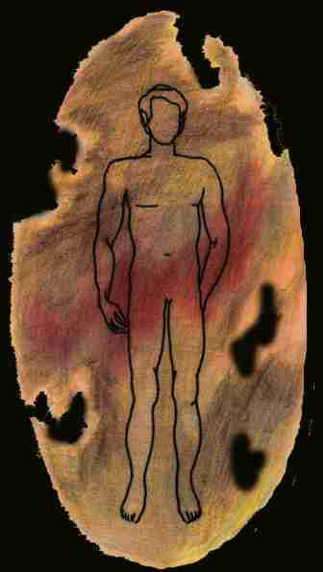 Aura of an alcoholic. In a state of drunkenness, the aura showed several holes. 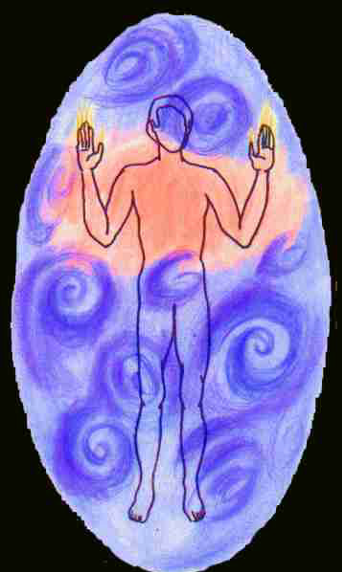 The aura of a very developed cleric especially showed the colours blue and rose, with an intensity ranging from bright to medium. From the fingertips, orange blazes were radiating with a size of about 5 to 6 cm. 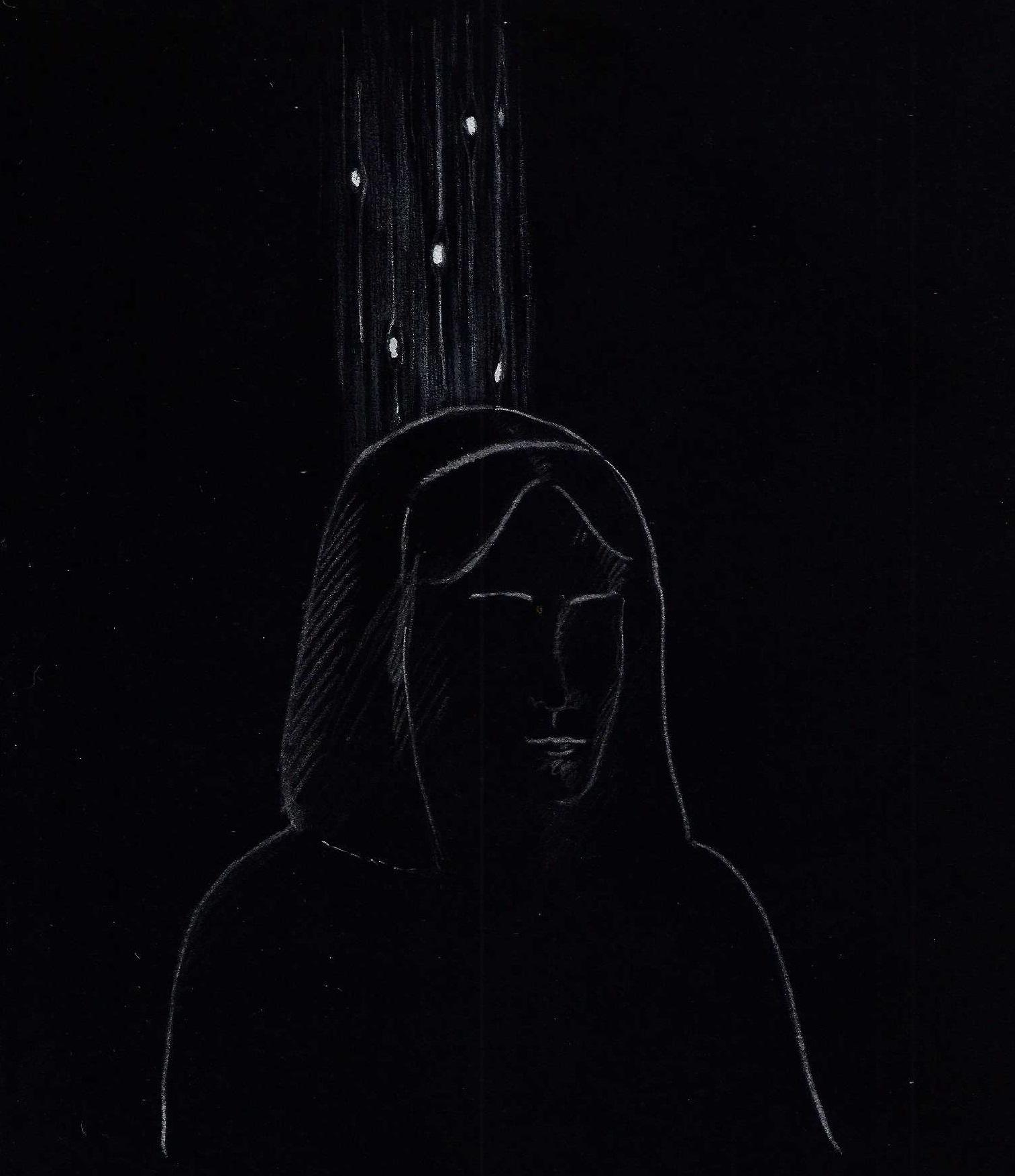 "When I was visiting Sunam in the end of october and I was in a relaxed and rather vitalized state myself, I noticed that I spontaneously were able to see auras – just when I was entering the apartment, in normal light conditions and normal activities. The sensations were distinct and intensive. I could see a distinctly light green (‘grass green’) luminous area around Sunam, with a light yellow that was a bit weaker than the green colour. Additionally, there was a mottled deep-blue area around him, ultramarine blue. In the room there were also Ratnavat, Mandsana and Amra. I looked at them unobtrusively while I was talking to them. In Ratnavat, a light blue was dominating, a beautiful steel or grey blue tinge like sometimes in a cloudy evening sky, and also a middle crimson to orange. In Amra, I could only see a distinct efflorescence in the forehead region that was ray- or flame-like and glowing red-orange. Apart from that, I could see a bit of yellow.

Most interesting of all was Mandsana, she was nearest to me in the room: I could only see golden-yellowish hues, and also a beautiful, deep turquoise in the neck region. But the most noticeable phenomenon was a current that was coming from her head; a column similar to the water jet of a fountain, with a diameter of about twenty centimeters. The flow velocity was about 30 cm/ sec. In this bundle-like flowing column there were ascending small orb-like forms, with a diameter of about one or two centimeters.

When we were talking about Amra then, I learnt that recently a clairvoyant had seen the same colours in Ratnavat. Samaya saw – according to Amra – the same efflorescence in Amra.

All these colour impressions were connected to unmistakable spiritual qualities."

Some people have a disposition to aura-seeing. Others can feel it, and in rare cases it can also be perceived as sound. The ability of aura-seeing is not of first importance to us. It is rather important to become familiar with the meaning of auric colours, because many astral planes are characterised by the auric qualities – and the colour of the aura corresponds directly to its qualities (to learn more about astral planes and their qualities, see Features and Rules of astral planes) For meditations, colour exercises and similar practices it is also very helpful to have a basic knowledge about auric colours and qualities.

Use of colours in advanced yoga:

An aura is like a moving colourful haze and its colours possess a luminosity that can range from dull to very bright, depending on amount of energy and pureness.

ATTENTION: the colours can be a help, but especially at the astral planes do never focus too much on outer appearances. The supreme rule still is: sensing gives the most important information about the quality of any being, place or object; not seeing!

The most important colours are described below. In Leadbeater’s book "Thought Forms" you can also see many different colours which correspond to the auric quality of each thought form (C. W. Leadbeater: Thought Forms. Various publishers).

Red is connected to sensory experiences, focus on the physical (materialism) and elementary vitality. The positive aspects are life and vital energy. The negative aspects are corporal attachment and materialism.

Orange unites physical-vital energy (red) with mental activity (yellow) and has a harmonizing effect on body and mind. When these colours show golden, orange and apricot hues, this can be seen as indicative for a spiritual connection and an influence from higher planes. Positive aspects of orange are awareness and careful thought. Negative aspects are inertia and oppression.

Orange with a lot of red:
tending to rule/ have control over others

Yellow represents the intellectual side of human life – reason, analytical mind, logic and judgement. The positive aspects of yellow are mental awareness and intellectual power. The negative aspects are fearfulness and weakness of will. 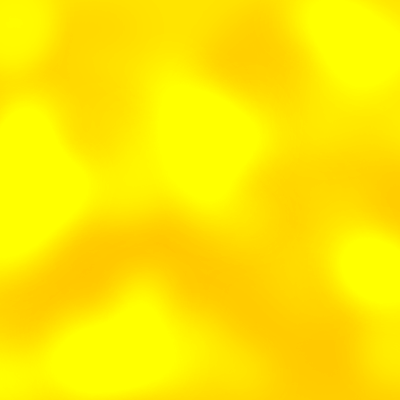 Golden with blue tinge at the edges:
spiritualised intellectuality

Green is the colour of harmony, balance and individual growth – every higher and lower manifestation of self-centredness and self-realisation. It has a strong healing power and is also connected to material well-being. It is the colour of lower or "objective" thinking.

Dirty Green:
jealousy in an oppressed and restrained form

Blue is the colour of the higher mental realms, the subjective mind. Its effects are inspiring, religious, soothing, cooling, harmonising. The positive aspects are spiritual qualities, artistic talent, selflessness and high ethics. The negative aspects show melancholy and existential crisis. The especially beautiful darker blue colours are stronger and are a sign that the person has found his/ her collective role in which he/ she finds fulfillment, completely devoted to service.

Nuances of blue and red in combination:

Violet is a sign of sublime spirituality and great spiritual powers. It is said that the aura of a great master is violet, merging into pale violet and white. It is the colour of the initiates and adepts, sign of cosmic love, wisdom and true greatness. The positive aspects are dedication and devotion. But for those who feel this colour with a negative attitude it can be depressing with fatal effects.

Brown has a strongly dulling effect on the auric vibes. It is a sign for characteristics like materialism, boundedness to earth in various forms, selfishness, acquisitiveness, greed for material success and accumulation of material values.

Grey colours do also always have a negative influence. It characterises the conventionally, formally and limitedly thinking and feeling person, lack of imagination, bigotry, negative thinking, depression and lack of courage.

The absence of any colour is equal with a negation of life. It excludes the light of life and is a sign for negative emotions of any kind: dark deeds, malevolence and evil thoughts, profligacy, depravity, hatred, grudge, vengefulness, boundedness to earth, ignorance, caginess, gloom, pessimism.