Depending on the interests, the attitude and the manner of how one is dealing with the phenomenon of psychogons, these are defined and described in different ways. One gets the impression of quite various phenomena. But this is wrong, for often we are dealing with one and the same phenomenon – only in different variations. A short overview of the different points of view can highly facilitate the understanding of the principal phenomenon. The definitions given below are arranged in a logical and not in an alphabetical order.

Manifold structures can occur in the auric periphery of a human being. Partly this phenomenon has a dynamical, fluctuating character. The common and established term for this is “thought forms”. The term was coined by Charles W. Leadbeater and Annie Besant, published in their book “Thought Forms”. The thought forms after Leadbeater represent preliminary stages of psychogons. They are short-lived, unconsciously built structures.

Manifestations which form in a dense emanation of subtle matter, called ectoplasm, are known to spiritism. These manifestations often show faces of ghosts that are present. As these phenomena are very dense it is sometimes possible to take infrared photos of them.

A term used in parapsychology. It defines a mental form existing for a longer period of time, which is created and controlled by a single person or a group. As the control of the psychogon happens unconsciously (resp. subconsciously), it seems to possess an own individuality. But in fact it is a marionette. The creation of a psychogon and the observation of its behaviour was conducted experimentally by a group in Toronto (Canada), led by a parapsychologist. The results were sensational and seánces with astonishing telecinetic phenomena were repeatedly demonstrated even in TV in front of an audience. The experimenters constructed a ficticious character, Philip, and developed him right down to the most minute detail. "Philip" became manifest as an entity possessing all the characteristics which were given to him, owning "memories" of a "former life" constructed by the group.

Egregore (male), Egregora (female), Italian. This term describes a thought form which is created and enlivened consciously through emotions and thoughts; normally by a group, less often by a single person. It behaves like a living being and is kept alive by rituals, attention and emotions connected with it. An egregor can outlive the group or person by centuries. Some magical practices try to bind a transcendent being into such a mental form.

A succubus can be an earth-bound spirit as well as a psychogon created out of subconscious wishes. Succubus: The term "Succubus" is derived from the Old Testament. It means a demon/ demoness appearing in the night and haunting sleeping people to make sexual contact. It is claimed that the demons are sucking vital energy. According to this belief, this phenomenon is considered to be fluidal energy vampirism. 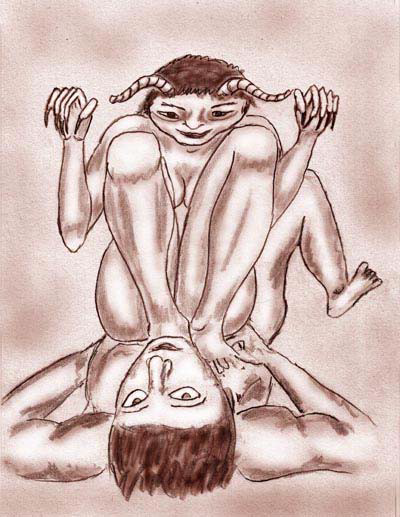 Succubus (picture by A. Ballabene)

Elf/ Nightmare: originally it was believed in Europe that the sleeping are haunted by elves which intent to father children in such a manner. Those children were considered as halfhuman (also called changelings). The word "nightmare" contains the Old English word "mare", which is quite the same as the German "Nachtmahr", also called "Alb" – a demon which haunts the sleeping and causes dyspnea and states of fear (this corresponds to the medicinal view on succubi, see below). The german word "Alb" correlates with "elf"/ "nightmare", and in German language the word for nightmare, "Albtraum", contains the word "Alb".

Medicinal view on succubi: Medically, the ocurrence is seen as an awareness of the sleep paralysis, where panic reactions can be caused by dyspnea (in dorsal position breath might become shallow). In the intermediate state between sleep and waking, the subconscious often interprets the paralysis as a result of influences from the outside. Thus the subconscious sometimes illustrates these perceptions by dream-like (or rather nightmare-like) pictures.

Succubus-psychogon: A psychogon can be built as a result of sexual wishes and imaginations, which can frequently lead to dreams with sexual contents. This interaction is not bound to the state of sleep paralysis, but it requires a mediumistic faculty which facilitates the discharge of fluidal matter to build a psychogon.

Comment by the author (A. Ballabene): The male endings of the words "succubus", "incubus" and "humonculus" are very annoying for me, e.g. when I have to denominate a woman as "succubus" in a novel like "Lilith". "Incubus" would be just as wrong, because an "incubus" is understood as the one who lies beneath during the sexual act. A "succubus" is someone who lies or sits above. But which alb/ nightmare would lie under a human?

The term chimera originates from the Greek mythology. Later it was used for composite beings like centaurs or Pegasus. 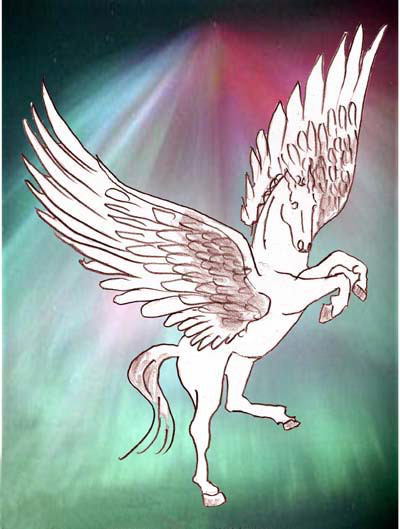 The term was adopted from the Greek mythology to modern biology and genetics, where "chimera" generally refers to organisms which are composed of body parts or genetic information of different origin (see Wikipedia, "Chimera").

This term is used sometimes for thought forms, but for nature spirits of earth, water, fire and air as well. This ambiguity causes confusion and the term becomes impropriate.

Principally elementals refer to mental-emotional parameters which are less complex than psychogons. It is a broad term for all patterns of thoughts and emotions, for energies and powers which were given life through emotions and which are working in our consciousness virtually independently, in accordance with their quality. It does not matter if we are aware of the elementals or not, they are existing inside of us, living and taking effect.

Tulpa is a Tibetan term refering to a being created through visualization practices, which can be densified up to an amount at which it is not only visible to its creator but to other persons as well. The nature and characteristics of a tulpa was made known to the Western world particularly by the researcher and writer Alexandra David-Néel.