Shakti and the Chakras

The ascension of Kundalini:

According to the established tradition, Kundalini ascends from chakra to chakra. Here the yogi achieves ever higher states of consciousness. When Kundalini has reached the top, the yogi will be enlightened. In practice I learnt that this simple step ladder of spiritual development is not right. Everytime when a subtler vibe is reached, this has to be assimilated firstly. That means that the whole complex of body, psyche, astral and spiritual layers has to be newly structured. Everything is connected, and if one part ascends the rest cannot simply stay behind but has to be adapted to the new conditions. Thus, the whole ladder of chakras is worked through for many times with a subtler vibe each. Every single chakra, beginning with the Muladhara chakra, has to adapt to the new vibe, to distribute this higher vibe within its area and to establish the corresponding connections.

There are different symbolic representations of Kundalini. Generally, we find a certain arbitrariness here. But what may become blurred in detail is, in fact, clearly seperated from each other when looking at the matter in its entirety. E. g. there is a clear difference between the energies (prana vayus) and the inherent intelligence (Shakti). As a general rule, a higher representation indicates an increasingly higher guiding intelligence which takes effect in our through Kundalini:

About Shakti and her guidance:

One can think about how it is possible that, with increasing spirituality, Kundalini – which might have been a wild and untamed force in the beginning – turns into a being which helps and protects us – and, if we are willing to listen inwards, a being which even gives advice. I cannot really explain why energies can develop into intelligences. But maybe things aren’t what they seem. Maybe all these intelligences and pseudo-intelligences have been there from the very start, and they just took turns as guides of our inherent powers. Firstly, the subconscious may have had control over Kundalini and later our Higher Self or a cosmic intelligence has taken the lead. Who or what this higher guidance is, isn’t really perceivable, at least not for me – but this intelligence exists. It is possible to communicate with it and I have experienced this clearly and for many times. We may not know who or what this intelligence is, but we can give it a name – and this name is Shakti. Shakti is the highest manifestation of Kundalini resp. of the intelligence which controls Kundalini. Through Shakti, the human is connected to the divine, cosmic consciousness.

Depending on what chakra is increased in its activity, Shakti shows herself in different ways. The following analogy might help to understand why this is the case: imagine sunglasses. They can have brown, yellow, blue or red glasses. Depending on through which glasses we see, the world will get a different colour. While wearing these glasses, we maybe will forget this fact and everything will seem normal then, although what we see is slightly tinted red, blue or yellow. It’s similar with Shakti, and that’s the reason why Shakti and the Kundalini – taking effect through a certain chakra – seem so tightly connected that we speak of Kundalini-Shakti and cannot longer distinguish between them. 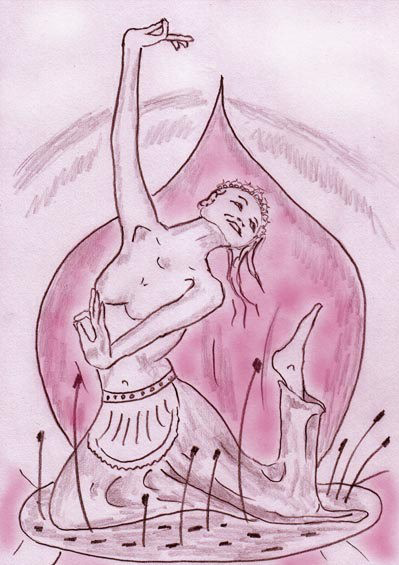 Shakti in the Muladhara Chakra (Root Chakra) – Shakti takes effect on the physical layer resp. on the body

When Shakti with her light quality revives the human being, she begins her ascension again in the Muladhara Chakra – this has happened before several times, but with lower and ever subtler growing vibes. Due to her activity the person changes – the human won’t get caught so easily by material desires and interests anymore. His way of life will change from inside and not basing on directives, like given in yoga as Yama (morality) and Niyama (ethics).

Out of an inner need, the diet is balanced – not more and not less than the body needs. Eating for compensation will not happen anymore, for the stresses have been relieved or they interact on another, subtler layer. Dry bread will be as appreciated as a cake. Smoking is unimaginable – the inside struggles against it. The need for property will lose importance as well. An inner entity struggles against every form of material obligation. 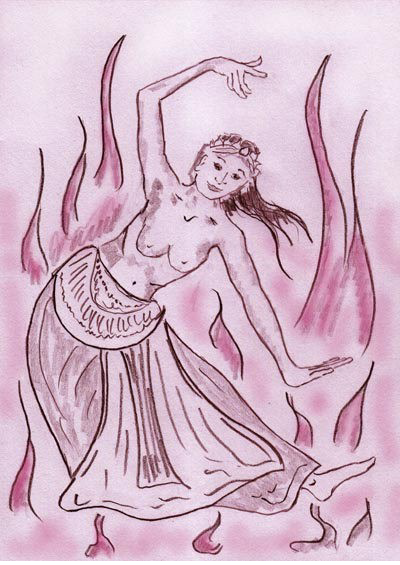 Shakti in the Manipura Chakra

Shakti in the Manipura Chakra (Navel Chakra) and/ or Solarplexus Chakra

In the previous stages, the Kundalini force has revived the human with emotional power in the Manipura Chakra, although the emotions could not be controlled then. Now, a new kind of energy arises in the Manipura Chakra, a "mediumistic electrical" energy – this may not be right literally, but it is likewise. If the human gets angry now – he will oscillate between higher and lower states – then light bulbs and electrical devices may break. It does not always have to be rage, it can be the subconscious "testing" these newly arised energies: radios are turned on or off, objects are moving, or other uncanny things may happen. The human has become mediumistic-paranormal in this stage. 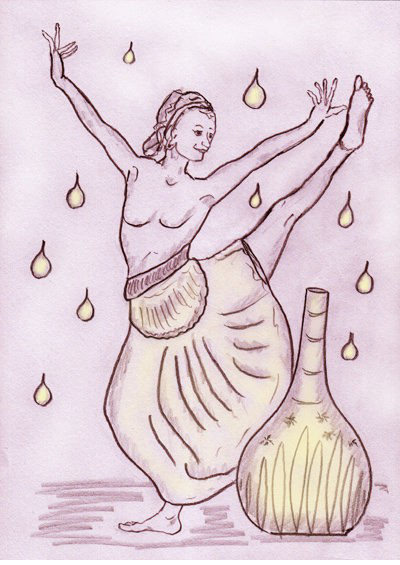 In the previous stages, love already has been developed. Now under the influence of Shakti a deeper love arises which enables to merge and to become one with someone or something. While before understanding had been developed through intellect and empathy, now understanding arises through delving into the personality of another being, through becoming one with it – thus, the situation is understood deeply and wholly. 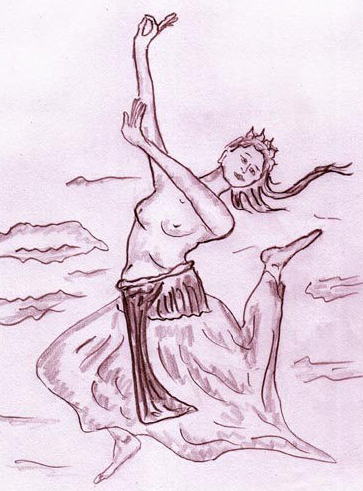 According to the Indian yoga teachings, the Throat Chakra is attributed to the element "akasha" (ether). From here on the soul (astral body) begins to loosen from the physical body. For the yogi/ yogini, a connection to the divine consciousness is already possible via the Anahata Chakra, but it is a mental-emotional connection. From the Throat Chakra on, the yogi is able to travel in the subtle bodies. His soul is free and rises above the physical body.

Shakti in the Ajna Chakra (Third Eye Chakra, Will Chakra)

With the sixth main chakra, the Ajna Chakra, an ability of inner clarity arises in the human, which enables him to observe untroubled by emotions and thoughts. If this inner clarity is subordinated to a greater goal it will be an important help, almost indispensable for the yogic practice. But if practiced excessively, this exercise can be disadvantageous – when the yogi becomes "one-eyed", or "white-lighted" as it is also called. Because too much of this white light does not only brings silence of thoughts but also extinguishes emotions. Firstly this won’t be recognized, because the exercise causes an euphoric feeling of happiness. It can be that the yogi becomes addicted to this exercise.